As far as animal sizes go, we Homo sapiens are rather on the large side of things. While it's true that many animals are larger than us (we can conveniently lump these animals in the category of 'charismatic megafuauna'), the truth of the matter is that most animals are much smaller than us. We tend not to think about them much because, well, they're small and easily escape notice. Numerically, about 98% of scientifically described animal species (~1,324,402 out of ~1,382,402) are invertebrates*, the vast majority of which are arthropods. Think insects, crabs, and spiders, and you get the idea: these animals are vastly numerous, but small. We are certainly more aware of big animals because we can see them and intentionally interact with them, but my casual observation is that the average person can't see anything smaller than about 5 mm. For all intents and purposes, objects smaller than that are essentially invisible.

There is nothing good or bad about this bias towards large(r) animals; it simply is. If you think about our evolutionary history as hominids, it was much more adaptive for our ancestors to notice the large predator chasing them (or the large potential prey animal foraging in the field in front of them) than the inevitable and unescapable tiny parasites lurking in their guts or crawling on their skin.

Part of what defines an animal is multicellularity--animal bodies are made of different types of cells. The number and type of cell varies from species to species, and in some species the number of cells in the adult body is fixed, a phenomenon called 'eutely'. Given the multicellularity of animals, it is understandable to assume that we are bigger than unicellular organisms, such as bacteria and protozoans. And for the most part, this is true.

Of course, it's the exceptions to the rule that are most interesting. Yesterday I completed my contribution to Snapshot Cal Coast 2017 by collecting a plankton sample from the Santa Cruz Municipal Wharf and adding a couple dozen observations to iNaturalist. The plankton was surprisingly. . . boring. There was hardly any phytoplankton at all, and not much in the way of animal diversity. I expected more.

I did, however, see these two organisms: 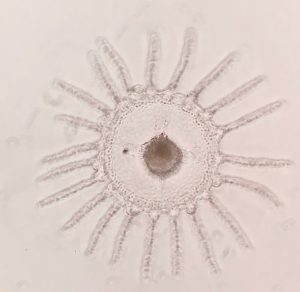 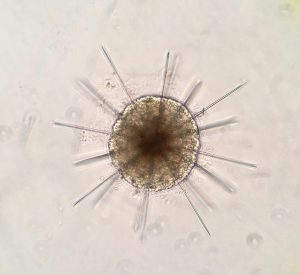 They are about the same size, approximately 3 mm in diameter. But one is an animal and the other is a protozoan. Can you guess which is which?

The organism on the left is a protozoan, a predatory marine amoeba-like creature called an acantharian. As such an acantharian consists of a single cell, the protoplasm of which you can see as the darkish matter from which the skeletal spines protrude. Like all amoebae, acantharians feed by engulfing and digesting other cells. The spines, composed of strontium sulfate, are thought both to deter predation and retard sinking. For an organism that has no propulsive capability of its own, the possession of spines to increase drag is a handy way to remain in the warmer surface waters where food is more abundant. Acantharians are usually most abundant in local coastal plankton during the spring and summer. I do occasionally see them in the winter, but they are always smaller than the ones I see in the summer.

The organism on the right is an animal, the medusa of the hydrozoan Obelia. The hydroid form of this animal is very common on pilings and docks, and its medusae are present in the plankton year-round.

These two vastly different organisms demonstrate very nicely that what's big for one group can be quite small for another. The acantharian above, measuring a whopping 3 mm in diameter (a size that would be invisible to most people), is much bigger than several multicellular animals--tardigrades, rotifers, and the larvae of many marine invertebrates come to mind. In fact, newly settled juveniles of the sea star Pisaster ochraceus are about 500 µm in diameter, or 1/6 the size of that acantharian. Of course, bigness and smallness are both relative, are they not?

Ultimate body size, whether singular or multicellular, has ramifications for physiology and ecology. Small organisms are much more strongly affected by the external environment than large ones and thus generally have more difficulty maintaining homeostasis. On the other hand, small organisms take less time to reach adulthood, have shorter generation times, and can respond more quickly to changing environmental conditions. Big organisms require more resources--space, food, etc.--and at a population level are less quick to adapt when the environment changes.

Maybe there's a lesson for us, no?