A few months ago, a former student invited me to participate in an activity with local Girl Scouts. The Scouts have a camp this weekend at Henry Cowell Redwoods State Park, and this year their theme is "Commotion in the Ocean." The former student, whose name is Thomas, works for the Squids for Kids program run jointly by the Hopkins Marine Station (the marine lab facility of Stanford University) in Pacific Grove and the NOAA Southwest Fisheries lab here in Santa Cruz. Squids for Kids provides Humboldt squids (Dosidicus gigas) to schools and other kid-focused programs around the country, along with instructions on how to dissect the squids and identify their parts. I think the way it worked is that the Girl Scouts applied for squid and Thomas was assigned the event. He invited me to join him because the Scouts thought it would be good for the girls to see a woman doing the dissection and getting all dirty.

Standard disclaimer: I feel very uncomfortable when people ask me to be a role model for girls, boys, women, men, whoever. It makes me feel self-conscious, as though I'm being scrutinized for a certain intangible quality of role-model-ishness and could somehow come up failing, and that I have to be better than I actually am. So I always go into these things with a little apprehension.

The thing about dissecting a Humboldt squid is that you can't go just part of the way into a squid; you have to dive in with both hands and resign yourself to the smell. Humboldts are large animals, compared to the ones I'm used to working with, and are easy to dissect:  All you do is make a cut open the mantle and all the internal organs are there to observe.

Problem with just diving into a squid is that once you do, you can't take any more pictures because your hands get all gunked up. This is the only photo I snapped of the morning's activities before things got very smelly. I really didn't want to smell it on me for the next three days so I wore a lab coat and a glove on my left hand, leaving my right hand "clean" so I could drink my tea and keep an eye on the time. Even so, my right hand still has a bit of squid stink after several hours of near-continual dunking in either seawater or hot freshwater. Maybe I'm just imagining that I still smell it.

Experiences like today remind me that I'm not very good with young kids. I am simply not accustomed to dealing with their short attention spans and don't know how to distill an explanation into 25 words or fewer, which is what seems necessary for the youngest Girls Scouts at camp today.

That said, there was one girl I found very intriguing. I don't know her real name but her camp name was Rockcod. She was maybe 9 or 10 years old. She didn't want to touch any part of the squids even though her friends were getting in there and touching the gills, eyeballs, tentacles, and innards. Rockcod told me that her dad does a lot of fishing and she goes with him. They've never caught squids but catch lingcods and various rockfishes, which they take home and eat. Her uncle once caught a yellowfin tuna that was "as big as the table," probably about four feet long.

Despite adamantly not wanting to touch the squids, Rockcod was clearly fascinated by them. She left our station to participate in other activities but kept coming back and asking questions. She wanted to know what all the parts were and really wanted to be around when we opened up the next squid. She asked all the right questions:

Several of the other girls (and most of their adult chaperones) were a bit squeamish and/or offended by the smell. I heard "Ew, that stinks!" more than a few times. Well, they do stink, there's no getting around it. Still, I'd rather smell an honestly dead squid than one that has been preserved in formaldehyde. And you do get used to the smell after a while. Except that I still catch a whiff of it emanating from somewhere on my body every once in a while. Hopefully it goes away with my next shower.

And I did get a thank-you gift! 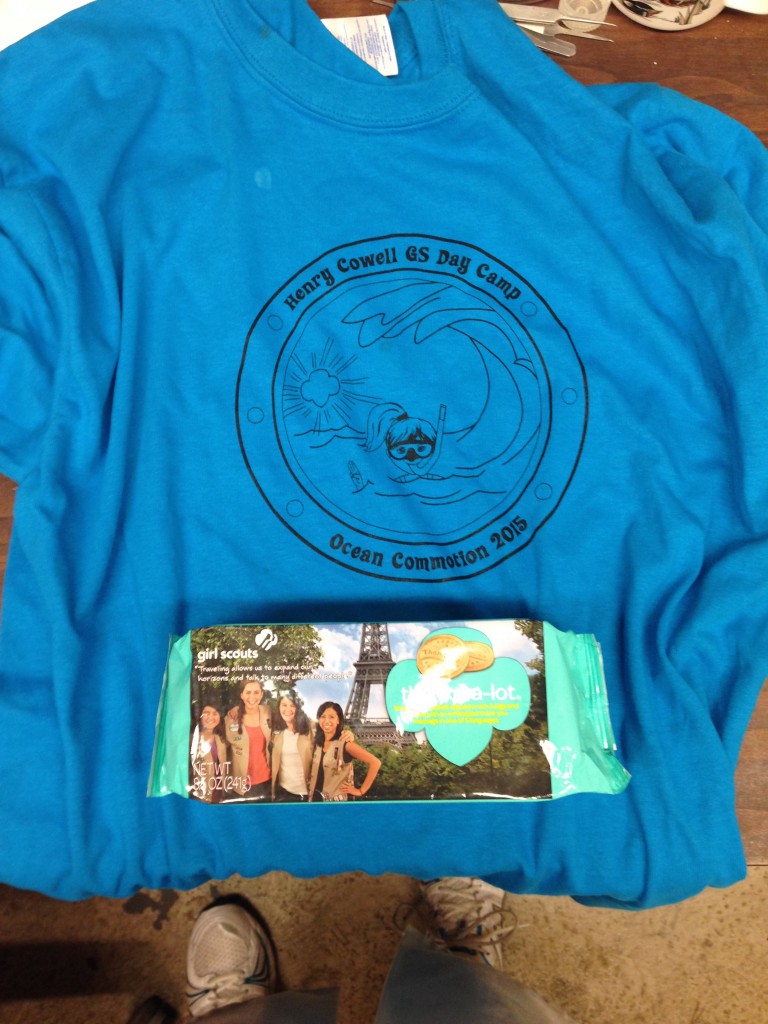 1 thought on “Some smells linger for days”