The marine macroalgae are, as a group, the most conspicuous organisms in the intertidal. Yet, most tidepool explorers dismiss them as "seaweeds" and move on to the next thing, which they hope is somehow more interesting. This is akin to visiting the jungles of Brazil and not paying attention to the lush foliage that defines that particular biome. I will admit that, as a zoologist whose primary interest is the marine invertebrates, I have been guilty of this offense. I've also felt guilty about the oversight and thought to myself, "I really should know the algae better." I have no formal training in phycology beyond auditing marine botany labs after I finished graduate school, but I've got the basics down and really have no excuse for the continuation of this gap in my knowledge.

So a couple of years ago I decided to start filling in that gap. I dragged out my marine botany notebook and have slowly been adding to it, building up my herbarium collection at the same time.

The red algae (Rhodophyta) are the arguably the most beautiful of the seaweeds, and inarguably are the most diverse on our coast. Some of them are easy to identify because nothing else looks like them, but many share enough morphological similarity that field IDs can be tricky if not downright impossible. For example, to ID a specimen and distinguish it from a close relative you may need to examine the number, size, and arrangement of cells in a cross-section of a blade. Some species are impossible to identify beyond genus (or even family, in some cases) unless you can look at their reproductive structures, which they might not have at the time they're collected.

One of the most ubiquitous red seaweeds, and one that is easily identified to genus, is Mazzaella. The genus name for this group of species used to be Iridea, which gives a hint as to the appearance of the thalli--many of them are iridescent, especially when wet. The species that I see most often are M. flaccida in the mid intertidal and M. splendens lower down. These species are usually not difficult to tell apart once you get used to looking at them and their respective habitats.

Mazzaella splendens is generally a solid brown with sometimes a green or purple cast. It is soft and floppy, and the blades are long (up to 50 cm) and taper to a point. The Marine Algae of California, which we call the MAC, uses the term "lanceolate" to describe this shape. Mazzaella flaccida is green or greenish-purple, sometimes more brownish along the edges; its blades are flexible but a teensy bit crisper than those of M. splendens, and its blades are described as cordate (heart-shaped) or broadly lanceolate.

Got it. That's not too bad, right?

But then you see something like this, and a whole other set of questions comes to mind.

Based on habitat alone these are both M. flaccida. The greenish thallus on top looks like textbook M. flaccida, but the lower thallus looks more ambiguous. It has the right size and shape but is the wrong color, and what's up with all those bumps? I brought these thalli back to the lab to examine them more closely. Here are the entries from my lab notebook: 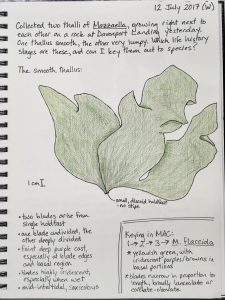 Now is the time to bring up the subject of life cycles in red algae. Algae such as Mazzaella alternate through three generations: male and female gametophytes, both of which are haploid; a diploid sporophyte; and a diploid carposporophyte. Here's a diagram that shows how this alternation of three generations works:

It was easy to see that the bumpy thallus I collected was sexy, while the smooth green thallus was probably not reproductive. Having both thalli in hand, along with the MAC and phycology texts in the lab, I was able to determine that the bumpy brown thallus is actually two generations in one body. So cool! But how does this work? The bumps on the thallus are called cystocarps. In Mazzaella a cystocarp contains the diploid tissue of the carposporophyte surrounded by the haploid tissue of the female gametophyte. Et voilà! Two generations in a single thallus.

Now, what's inside the cystocarp? What does the carposporophyte tissue actually look like? To find out I had to do some microsurgery, first to remove a carpospore (1-1.5 mm in diameter) from the female gametophyte and then to cut it open to see what's inside. What's inside were microscopic diploid carpospores, which grow into the macroscopic sporophyte generation. Forcibly dissected out as they were, they don't look like much, just tiny round cells about 2 µm in diameter.

The next logical step would be to isolate some of the carpospores and try to grow them up. I wasn't thinking about that at the time and pressed both thalli. However, I do have another female gametophyte with cystocarps that I can investigate further tomorrow. It's probably a fool's errand, as I am not going to bother with sterile media and whatnot. Oh well. Nothing ventured, nothing gained, right?