While much of California's interior swelters under abominable heat this week, here on the coast we are blessed by the presence of the marine layer, which often brings cooling fog. It was drizzling when I got up this morning, and although the sun did make brief appearances the air remained refreshingly cool. And right now, on the antepenultimate day of July, I'm wearing a jacket! 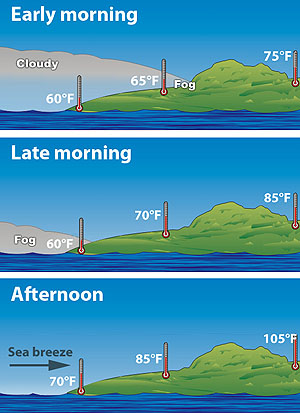 The marine layer is an inversion layer in the lower atmosphere that forms when a warm, moist air mass sits over a large body of water. The water cools the lower portion of the air mass, and since cool air holds less moisture than warm air, water condenses out as fog. The term "inversion layer" refers to the fact that temperature within the air mass increases with altitude, which is the opposite of the normal temperature-altitude relationship. In California the marine layer is blocked by mountains such as the Coast Range, but flows through gaps in the mountains to bring a bit of cooling relief to some lucky areas. When I was living in Davis, CA we used to pray for the arrival of what we called delta breezes to take edge off the heat in the evenings.

Where I live now, the marine layer is thickest from May-July. These are typically our foggiest months, with the daily weather following the pattern in the diagram above. This is my favorite weather of the year:  A cool foggy morning with the fog clearing to the coast by mid-day, a few hours of bright sunshine, and the fog returning in the late afternoon or early evening. A foggy morning pretty much guarantees that it won't get too hot later in the day, but I'll also get some sun.

Of course, El Niño changes everything, and it appears that we're heading into a strong one. El Niño causes, among other things, a warming of the water in the eastern Pacific. This means that the temperature difference between the ocean and the overlying air mass is decreased, resulting in a less robust marine layer. At ground level, this manifests as less fog and hotter days. It seems to me that we've had fewer foggy days this year compared to what I'm used to, corresponding to the lack of upwelling that is also a hallmark of El Niño.

Today, however, nature's air conditioning was operating again and I, for one, am happy about that.