The other day I was walking along Pescadero Beach about an hour north of where I live. My husband and I had gone on a short afternoon hike in Pescadero Marsh and decided to return to the car via the beach. It was a windy afternoon, making photography difficult, but I did enjoy the chance to get out, stretch my legs, and observe some nature. The ocean was quite lively, and as always it was fun watching surf scoters playing in the waves crashing on the beach. These ducks breed in freshwater lakes in northern Canada and Alaska, but spend their winters along the Pacific and Atlantic coasts of North America, where they forage on small invertebrates.

High on the beach well above the high-tide line we spotted some little brown puff balls, perfectly colored to match the sand and tiny enough to disappear completely in the divots formed by the footsteps of previous beach combers. They would run along the sand and duck behind a small hillock of sand, where they would be protected from the wind and from visual predators. See how well they disappear?

These are the delightful snowy plovers in their winter plumage. The field guides describe them as inconspicuous, pale little birds, which they certainly are. Unlike the sanderlings and other 'peeps' that frequent our beaches, which gather in large flocks and run away from both waves and people, snowy plovers react to human presence by hunkering down in small depressions and relying on their cryptic coloration for protection. Snowies live in California year-round, but I see them usually in the winter and spring. They nest in the sand, laying eggs in small depressions lined with shells, pebbles, and other like debris. Both parents incubate the clutch of 3-4 speckled eggs, which hatch into speckled nestlings.

It's this habit of nesting on sand that imperils the snowy plover. They are not as a species considered endangered, but some populations are declining. Human activities and the presence of dogs on beaches disrupt breeding birds and destroy eggs. Such tiny birds have a high metabolism and need to feed constantly. Every time they are disturbed into running away from humans they expend precious energy that they cannot spare. This is why some beaches where snowies are known to be nesting are closed to humans during the nesting season.

So if you see one of these signs on the beach, stay out of the fenced areas and keep your eyes open for tiny sand-colored puff balls. Even when the birds are not breeding they should be left alone and watched from a distance. Use your binoculars to get a close-up view of them. 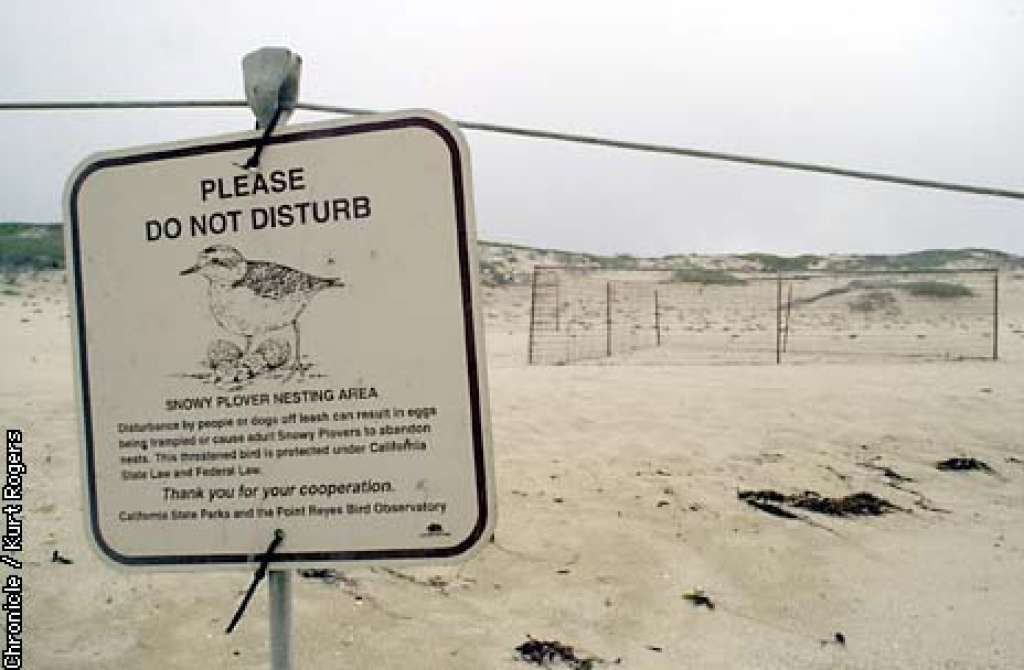