A couple of months ago I posted about the vernal equinox and the arrival of spring as heralded by the return of the swallows to the marine lab. This spring I've been keeping an eye on the mud nests that have been going up under the eaves of one of the buildings. It seemed to me that the swallows were a bit slow getting started with the nest-building, but in the past handful of weeks they've gotten more serious about it and have started raising babies.

When the birds are flying, it's pretty easy to distinguish between barn swallows and cliff swallows because barn swallows (Hirundo rustica) have a very deeply forked tail.

Cliff swallows (Petrochelidon pyrrhonota), on the other hand, have a more trapezoidal tail that is not forked:

This spring both species nested together under the eave of the Younger Building. When the birds' little heads are peeking out of the nest you can't see the tail (obviously) so it's harder to tell the species apart, especially when the parents are away. Turns out the species' nests have different shapes: barn swallows have nests that are described as "cup-shaped" while cliff swallows' nests are gourd-shaped. I'd read this description before but didn't really understand the distinction; this year it was pretty easy to tell the difference between the two. 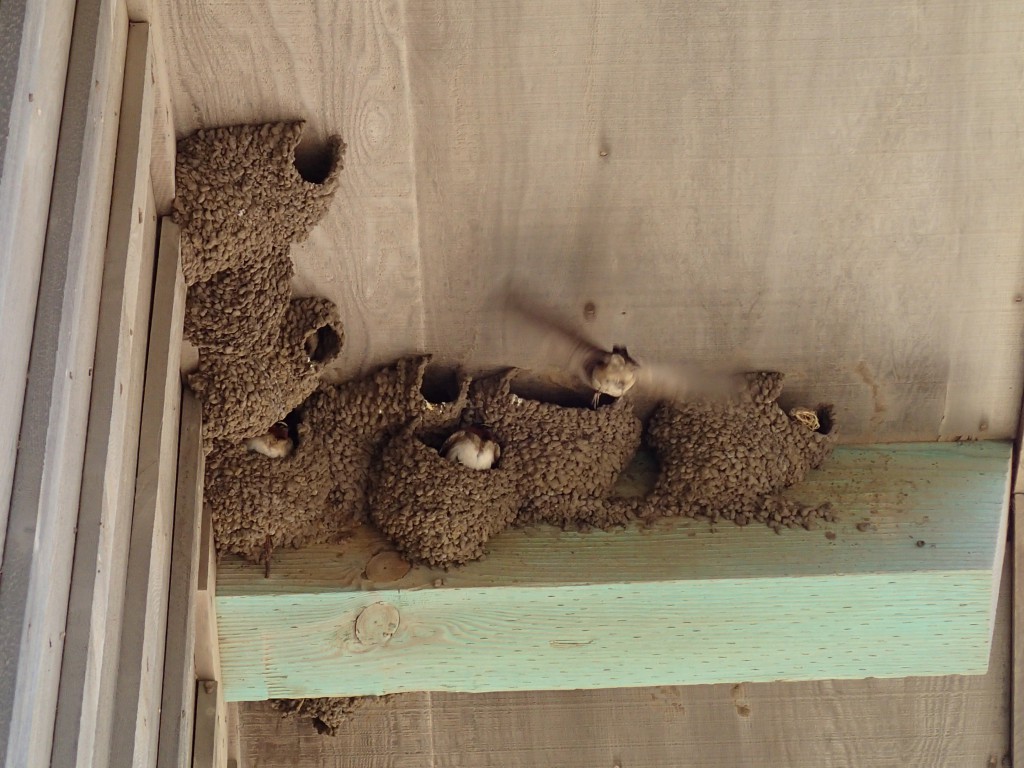 I like how the nests are just crammed in together. Most of these are cliff swallow nests, but the right-most three are barn swallow nests. That's a barn swallow flying directly towards the camera. I've seen as many as four babies peeking out of that second-from-the-right barn swallow nest. They've obviously fledged, as quite often all the nests are empty, but they will return to the nest as long as the parents keep feeding them.

Here's a closer view of the two types of nest:

As recently as this past week I saw parents sticking additional dabs of mud on the nests. Perhaps there will be a second brood once these fledglings leave for good?