On Easter Sunday we got a call about a big swarm of bees in our neighborhood. The woman who called has a couple of hives in her backyard, one of which had swarmed three weeks earlier. We caught that swarm and installed it into our Green hive at our house. This time it was her other hive that swarmed, and the swarm was HUGE. The bees went to her neighbor's yard and gathered in a tree about eight feet off the ground. It was very considerate of them to end up in such an accessible spot!

The swarm consisted of two lobes, each of which was about 1/2 meter deep and 1/3 meter wide. It probably contained 20,000 bees. See?

Each of those lobes easily contains as many bees as were in the packages that we bought when we got our very first bees four years ago. It was too big a swarm to simply shake into a box, so we tried lifting a hive body box with frames under the bottom of the lower lobe, hoping that the bees would find the smell of wax enticing and go into the box on their own. They proved to be not quite that cooperative, and we had to brush and scoop them into the box. But they did go willingly once we got started.

Then we brushed and scooped. 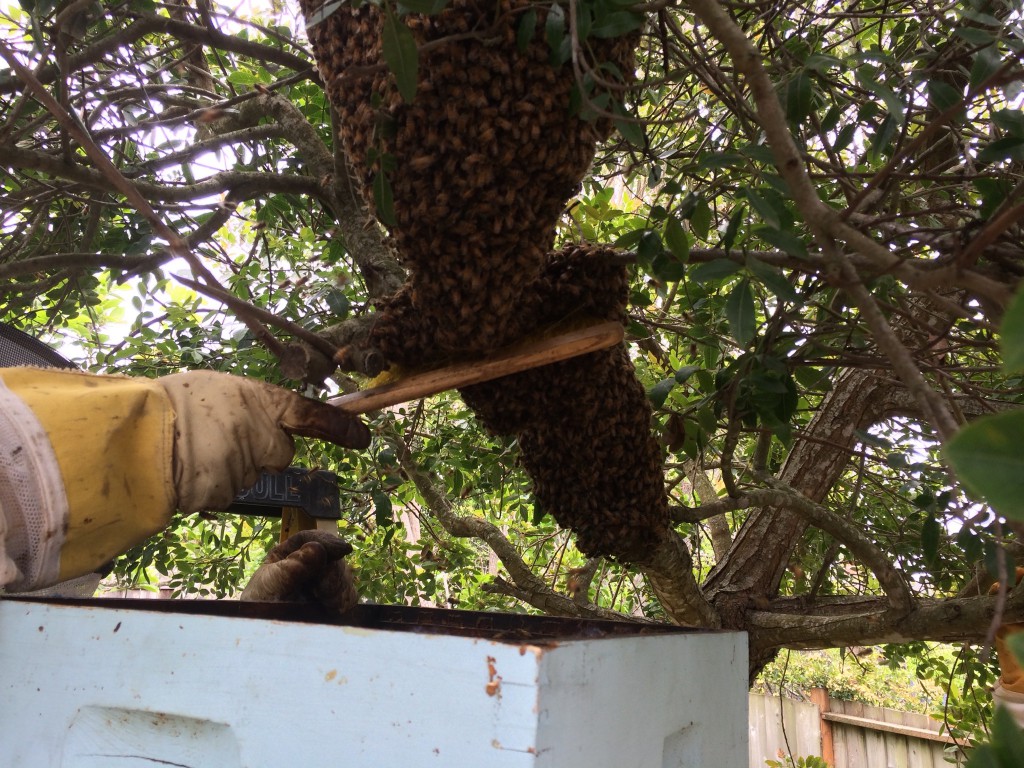 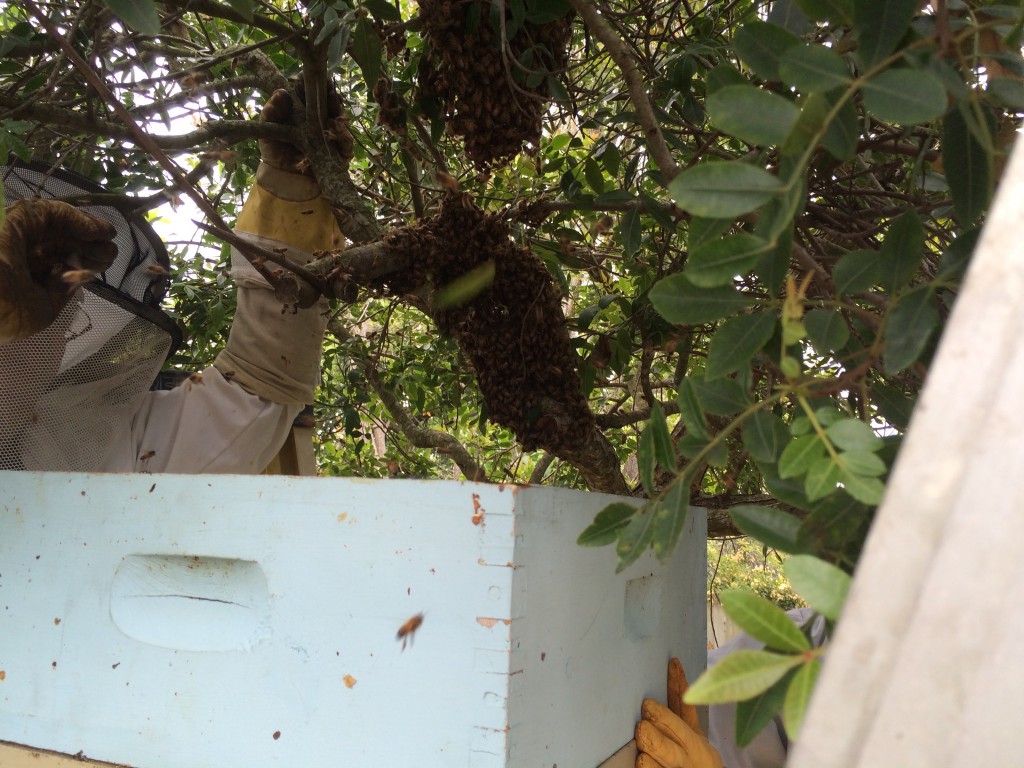 Eventually we got most of the bees from the lower lobe into the box. Then we shook the branch with the upper lobe to drop them into the gathering of their sisters. This put a lot of bees in the air, and we maneuvered the lid onto the hive and backed away to let everything settle down. As we were leaving we saw that some of the bees were lifting their abdomens into the air and fanning their wings. This behavior disperses a pheromone that is secreted from the Nasonov gland in the bees' abdomen, a sort of "this is home" type of thing. They generally won't do this unless they have a queen, so somewhere in that mishmash of 20,000 or so bees there's a queen.

Later in the evening, when it had cooled down quite a bit, we brought the hive home and placed it on our yard, between the Green and Purple hives. Now we have a Blue hive at our house!

We can infer a bit about the origin of this swarm and the hive it came from. The woman whose hive threw it has two hives in her yard. One hive threw a swarm three weeks ago. On that same day, the beekeeper inspected both of her hives and found lots of queen cells in the hive that threw the swarm (I'll call this Hive 1, just for the sake of convenience) and none in the second hive (Hive 2). Then this humongous swarm emerged on Easter Sunday. That afternoon the beekeeper inspected her hives again and found several queen cells in Hive 2. So in the three weeks that passed between swarms from this beeyard, the bees in Hive 2 decided that they were going to swarm. They produced a bunch of queen cells, and probably just as the first new queen was about to emerge and announce her presence with authority about half the colony dragged away the old queen and landed in the neighbor's tree.

Typically, the first swarm that a colony throws in the biggest. One-third to one-half of the bees can leave, and they do drag along the old queen. One of the queen's daughters will have to emerge from her queen cell, take her mating flights and be successfully inseminated, and return to take over the egg-laying duties of the original hive. In the meantime, the swarming bees (with the old queen in tow) gather in a temporary resting spot somewhere and send out scouts to search for suitable place to set up a permanent residence. The scouts return to the swarm and try to persuade their sisters that they've found the perfect spot. The decision-making process can take just a few hours, or stretch out and last for days. A beekeeper on the lookout for swarms generally has to act quickly once a swarm has been spotted, because there's no way to know how long the bees will hang out and be catchable.

All told, this is the fourth swarm we've caught so far this season. We have populated all of our hives and used up most of our equipment. We will have to do a honey harvest in the next month or so, because a couple of the hives are getting pretty tall. In the short term, at least, there will be lots of honey for anybody who wants it.