Library of Congress  I was completely unprepared for how astoundingly beautiful the Library of Congress is. From the outside it looks like another of the many federal buildings constructed in the Classical style. The interior, though, was spectacular.

The ceiling of the Great Hall is magnificent--take a look at this stained glass!

We joined a tour and the docent explained the significance of many of the architectural and artistic details she pointed out to us. She told us that when the building was designed in the 1890s, the intent was to portray the United States as a major player on the world stage, able to build in the Classical style as well as the Europeans did, while adding details that are distinctly American. For example, the mosaic floor of the great hall features a motif of an ear of corn, to represent a New World plant that isn't native to Europe.

And this painting, high up on a wall, represents Sport. It features  baseball, that most American of sports! The corresponding painting on the opposite wall shows American football. And of course the athletes are naked, because that's how the ancient Greek athletes competed. Artistic nudity, either in painting or in sculpture, was not a problem in the 1890s. There were no prudes calling for fig leaves to be placed over statues' genitals, or for female nipples to be covered with pasties.

Our docent told us that the building's designers were all Americans, but that some of the actual artisans were brought over from Europe. Likewise, much of the stone came from quarries in the U.S. The marble for those columns with the fancy capitals, however, was mined near Siena, Italy. She wasn't sure if it was Cararra marble. I think the look is right for Cararra marble, though.

There a lot going on, visually, inside this building. It's exactly the kind of visual input that should have killed my brain right on the spot. However, because all of the elements conform to the theme of Classical Greek and Roman design, they fit together thematically. The net result is very pleasing to the eye. I would really like to return and go on a tour with a different docent, who would highlight other things for us to look at. The amount of symbolism and history in the building is fantastic. Every item and detail means something.

Our docent pointed out that there were no depictions of named women, anywhere in the Library of Congress. However, female figures were often used to portray broad themes such as wisdom, philosophy, culture, government, and the like. There is one mosaic of the Roman goddess Minerva:

Minerva is located at the landing on the staircase leading up to the overlook. Tour groups are allowed up to the overlook one at a time, and nobody is allowed to stop at the Minerva mosaic. The only way to photograph her is from across the room.

The overlook looks down into the Reading Room. It sounds like anybody needing to do research can obtain a library card and use the resources, including the Reading Room. As mere visitors, we were restricted to looking down from above.

The Library of Congress holds one of three existing Gutenberg Bibles printed on vellum; the other two are in Europe, housed in Paris and London.

The docent described how Gutenberg had to set, by hand, every single letter on each page he printed, and that he needed a way to organize all of the letters so he could find them easily and use them again. He decided to put all of the capital letters on the upper levels of his shelves . . . which is why we call them 'upper case' letters! And the lower case letters were, of course, organized in the lower levels of the shelves. I had no idea how or from where we inherited that terminology. If Gutenberg had put all the capital letters in boxes on the floor, 'upper case' and 'lower case' would mean the exact opposite of what they do mean!

Thomas Jefferson's library is housed in this building, as well as memorabilia from Bob Hope. It also holds much of the estates of George and Ira Gershwin, some of which is displayed in the Gershwin Room, opened as a permanent exhibit in 1998. We got to see George Gershwin's piano! It's a black Steinway grand, a smaller version of what you'd see in any concert hall and doesn't look particularly special until you consider the musical genius of the man who sat at it and composed Rhapsody in Blue and An American in Paris. Not to mention Porgy and Bess. I mean, WOW!

It doesn't get more American than that, does it?

Smithsonian National Museum of Natural History  Finally, on the afternoon of our last day, we got to visit the NMNH. My friend, Dr. Chris Mah, works in the Invertebrate Zoology department of the NMNH. We arranged to meet him outside the staff entrance so we could bypass the ginormous line, then wandered the hall for a couple of hours before meeting up with him again for a tour of the behind-the-scenes stuff.

To be honest, while I love exploring any natural history museum, this one was too crowded for me to relax and enjoy. Again, it was because I was there during spring break, and all of the museums were especially packed with visitors. We had time to wander through the Ocean Hall, the fossils, and the minerals and gems. The minerals and gems are often my favorite part of a natural history museum, because (a) I'm not a geologist, so there's always stuff for me to learn; and (b) I love the colored minerals. I don't covet precious gems because of their monetary value, but I do love looking at them for their brilliant colors.

I took only one good picture on the main floor of the museum--there were too many people around for me to be able to take the time to frame shots nicely and after a while I gave up. But this is the fossil skeleton of a whale ancestor. Note that this animal didn't have just the pelvic bones that modern whales have; it had fully formed hind limbs. The most recent thinking is that Ambulocetus natans was entirely aquatic, but may have been able to walk around on the seafloor even if it never came out onto land.

The real treat for us was meeting up with Chris again at the end of the day. Chris took us through the security doors to the Invertebrate Zoology department, where the various collections are housed. This is where all the cool (and bizarre) stuff is kept. Most of the items are not going to be displayed, but are used by scientists studying particular groups of animals. Chris works at the NMNH but also travels to museums in California, Paris, and Tokyo to identify sea stars in those collections. The bowels of a museum are like the bowels of any other building--fluorescent lighting, dingy walls, old posters and whiteboards on the walls. 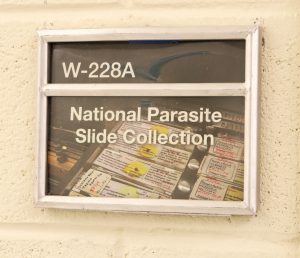 This was the best door sign. In recent years the federal museums have undergone reorganizations and consolidations. I don't know why and forgot to ask Chris, but the Invertebrate Zoology department inherited the entire National Parasite Slide collection. I bet it's a huge collection of parasites sectioned and mounted on slides.

In one of the collection rooms, sitting against the wall, was one of the most godawful objects I have ever seen.

It's a giant clam shell (Tridacna sp.) mounted on a silver base of mermaids. At first I thought it was a bathroom sink, but Chris said it's a punch bowl. Apparently there's a whole set of punch cups that go with it. The whole shebang was a gift to one of the early 20th-century presidents. Seems it might be a better item for the American History Museum, but may be they got right of first refusal and refused to accept it. Or maybe because of the clam shell the IZ department wanted it? Doubtful.

The collections are housed in movable shelves, in some order that hopefully makes sense to both the curators (people who decide what goes where) and the scientific users. Here's a bit of the coral collection:

Items that are being actively studied or need a temporary place while their permanent home is being decided or made ready end up spread out on big tables. This is the kind of thing that I find fascinating. The detritus of working scientists is fun to examine.

These are freshwater bivalves:

Chris said that the museum acquires items from a variety of sources: private collections, smaller museums or schools that can no longer keep all of the material in their own collections, and donations from individuals. Some of the artifacts are quite old, and arrive in quaint containers such as these nostalgic match boxes. Other things are packaged in paper towels and plastic bags. This, of course, is for dry specimens. Wet specimens, preserved in alcohol or formalin, are stored in buckets elsewhere.

Chris showed us some specimens that were of special interest to this marine biologist from California. The first were some brittle stars, Ophiocoma aethiops, collected by Ed Ricketts! Get a load of the label on this box:

There were four other boxes of the same animal. The date (March 20, 1940) and location (Espiritu Santo) indicate that this specimen and the several others just like it were collected during the trip that Ricketts and Steinbeck immortalized in their book Sea of Cortez. I read this book every so often, and use bits of it in lectures. I know that most of Ricketts' collection was deposited with the Hopkins Marine Station, part of Stanford University in Pacific Grove, after his death, and it was really cool to see this set of specimens in the Smithsonian.

The other special item that Chris likes to show visitors from California is the type specimen of one of our local sea stars, Pisaster giganteus. Before the onset of sea star wasting syndrome I'd see this star occasionally in the low intertidal, and divers would see it subtidally in kelp forests. The biggest one I'd ever seen was probably about 23 cm in diameter, a bit larger than my completely outstretched hand. What the Smithsonian has in its collection, for reasons that I don't remember, is the type specimen for this species. The type specimen is the individual (or group of individuals) that is the basis for the scientific description of a species and the species' name. You can think of it as the 'default' for a species, with an important caveat. Many times a species is named based on a type specimen that turns out to be not the norm for the species, which is why we encounter scientific names that are descriptive but make no sense.

The tag says that this animal, which indeed lives up to its species epithet, was collected from Tomales Bay in 1857. It's easily three times the diameter of the conspecific stars that I've seen alive. And even in photos of subtidal stars, I haven't seen a P. giganteus this big. Do they just not get this big anymore? Does it have something to do with habitat? I wouldn't have expected to find P. giganteus in Tomales Bay, because I usually associate them with a rocky bottom in a more exposed habitat. So what's going on with this type specimen? I don't know, maybe nothing. This thing is remarkable for its huge size, though. Stuff like this is very cool. I always like going backstage and getting to see things that will never make it into the exhibit hall.