This morning I went out on what will probably be my last low tide of the season. We don't get any good (i.e., below 0 feet and during daylight hours) until November, so it's time to hang up the hip boots for a few months and work on other things. I had planned to go to Natural Bridges even before the shipwreck incident, and since the wreck is right next to Natural Bridges I thought it would be good to check on how much debris is washing up at a site I visit frequently. 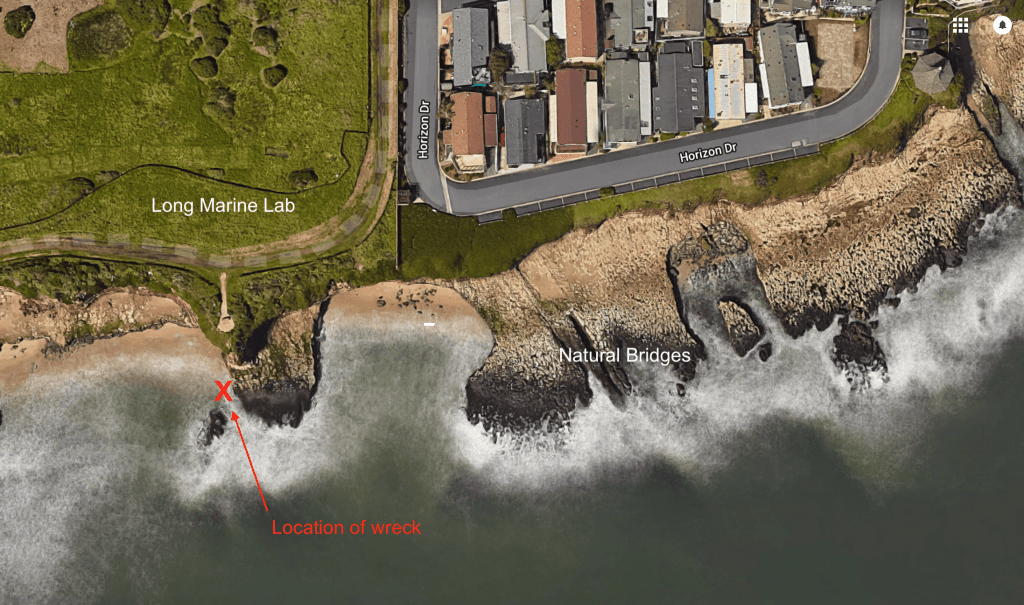 I'm sure that most people are familiar with the phrase "flotsam and jetsam", referring to pieces of miscellaneous stuff. I had to look up the terms to remember the difference between them. Flotsam is the stuff that floats on the water and gets washed up when a ship or boat wrecks, while jetsam is the stuff that is deliberately thrown overboard to reduce weight (say, to increase speed). What I would be seeing today is flotsam.

It was so sad. I'm not naive enough to have thought there would be no debris, but I wasn't sure what to expect--big pieces? small pieces? identifiable pieces? At this point I hadn't checked on the status of the boat yet and didn't know how much of it was still grounded off Terrace Point.

The first thing I saw was something (I don't know what) that had been dragged up the beach. It looks like a piece of equipment tangled up in a big piece of fabric, maybe a t-shirt? More than one t-shirt?

The first recognizable thing I saw was, oddly, a bulb of garlic. I don't know why it was surprising. Obviously, people who spend a lot of time on boats eat on boats, and some of the flotsam from any shipwreck is going to be food, right? Another food item that washed up was a vacuum-sealed package labeled "Emergency Ration".

Another everyday household (boathold?) item was a tube of sunscreen. I also saw a few plastic utensils, which may or may not have been from the shipwreck. Unfortunately there's always some plastic detritus on all of our beaches these days, a legacy from decades of single-use plastics being literally thrown to the wind to end up as garbage in the oceans and elsewhere. Hard to believe that "out of sight, out of mind" used to be the universal prevailing outlook, isn't it? Here in California and elsewhere there is much greater awareness in recent years that plastic in the environment never really goes away. It just breaks down into smaller and smaller particles, which can enter the food chain at lower and lower trophic levels. That's a whole other story to talk about. Maybe some day I'll be brave enough to tackle it.

Stuff from the wreckage was strewn across all of the intertidal benches and pocket beaches at Natural Bridges. This is looking towards Terrace Point, where remnants of the boat are stuck in the ground:

When I was watching the crews pumping fuel off the wrecked boat yesterday, I saw two survival suits washing around in the surf, and wondered where they would end up. I saw one of them this morning, along with two life vests.

And an entire boat. This is the inflatable Zodiac that had been tied to the roof of the cabin of the F/V Pacific Quest.

I don't know what Marine Compound is, but a bottle of it washed up, along with what looks like a piece of insulation:

And of course there was styrofoam. Styrofoam is insidious stuff, because it doesn't remain intact long enough to be removed as big pieces, but instead immediately starts breaking down into small bits that will soon enough become the nurdles that are such a problem for marine life.

Already the pieces of plastic and styrofoam were getting smaller. I don't know what the blue stuff is; another form of styrofoam, maybe?

Not all of the flotsam has washed onto the beaches and rocks. There is still a significant amount floating in the water, to be transported to other sites near and far. There's even flotsam in the tidepools. Wood, fiberglass, and plastic are all included.

After leaving the intertidal I went to the marine lab to see what things looked like from the cliff about the wreck. The entire front part of the boat is now gone, and the only part remaining is the aft end containing the two heavy engines.

From the cliff you can better see how widely dispersed the flotsam is. It isn't concentrated in any particular area but is everywhere, in pieces small and large.

There is some good news. All of the fuel was removed from the boat so there's no further danger of additional chemical pollution into Monterey Bay. The salvage crew did remove some of the debris from the immediate area around the wreck, and tomorrow the engine will be removed by crane up the cliff. It's going to be an impressive and LOUD undertaking, starting very early in the morning.

Taking the long view, this is one of a great many acute insults to the marine environment. The ocean is resilient to some extent, but our actions are causing changes that affect the entire biosphere. I'm having a hard time finding a silver lining in this shipwreck. I certainly never wanted to bear witness to an environmental disaster on any scale. And while in the grand scheme of things this is a small localized event, it feels pretty momentous to me.

I'll leave you with this more positive photo. Flotsam aside, it was a beautiful morning.