In early July we joined my in-laws on a 2-day driving trip around the International Selkirk Loop, a series of highways that follow rivers and lakes through the northeast corner of Washington, the northern skinny part of Idaho, and southern British Columbia. These roads pass through some beautiful country in both the U.S. and Canada, and it would be a nice trip to take at a more leisurely pace, stopping to explore some of the little towns along the way.

Knowing that we'd be driving through some spectacular scenery, I decided to test-drive a wide-angle lens. I rented the Nikkor 16-80mm lens, designed for crop-sensor cameras such as my Nikon D7200. I don't have much experience with wide-angle lenses, so it was a different kind of photography for me. And boy, talk about a whole new way of seeing things! I could get into landscape photography now. This post will showcase some of the photos I took with this lens. 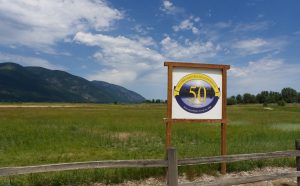 Day 1:  Our trip started in Blanchard, Idaho, a tiny dot on the South Lakes Super Side Trip outlined in pink in the map. Our first sight-seeing stop was the Kootenay National Wildlife Refuge, near the town of Bonners Ferry and about 20 miles south of the Canadian border. I hoped to see a moose. En route to the Refuge we took a dirt road and got a little lost. But our accidental detour took us through some wide open landscapes, and the sky was fantastic.

The Refuge is on the Pacific Flyway and is visited by many migrating birds in the spring and autumn. Mid-summer is supposed to be the best time to see moose, but the moose didn't read the same pamphlet that we did.

Seriously, doesn't this look like quintessential moose habitat? No moose to be seen.

Crossing into Canada, we continued driving north along the east side of Kootenay Lake. One of the perks of the trip is the free ferry ride across the lake, from the town of Kootenay Lake on the east shore to Balfour on the west shore. During the summer season the crossing is traversed by two ferries, the M/V Osprey 2000 and the smaller M/V Balfour. We were on the Osprey, which runs year-round. Kootenay Lake remains ice-free in the winter, allowing business and pleasure craft to operate year-round.

Here's the other ferry vessel making the eastward crossing:

That night we stayed at Ainsworth Hot Springs Resort, where we had a fantastic dinner and 'took the waters' before going to bed.

Day 2:  Our first stop on the second day was a town called Kaslo, the home of the S/S Moyie. The Moyie was one of several steam ships that transported passengers and cargo up and down Kootenay Lake. She operated from 1898 to 1957, when she was retired from service and sold to the City of Kaslo for $1.00. She was hauled up onto land, permanently dry-docked, and restored to become a museum. As the oldest known intact vessel of her type, the Moyie gives visitors a glimpse into the past. One thing I noticed right away was that people were a lot smaller 100 years ago.

Back in the day, there were 11 sternwheelers running on Kootenay and the other lakes in the region. The really cool thing was that they connected with the railroad lines, allowing transport of goods and people throughout the area before there were roads. Passengers would board the Moyie in the morning, stow their children and the nanny in one of the staterooms, and party in the parlor while cruising up or down the lake. It would be a leisurely cruise, with the passengers relaxed, well fed, and liquored up.

Passengers were looked after by a crew of stewards. I like kitchens, so this butler's pantry was my favorite part of the boat. Note sloping floor!

And because safety always comes first, here's the obligatory set of instructions for how to put on your cork life jacket. I'm guessing that they are called Cork Life Jackets because they are filled with cork, which apparently was A Real ThingTM.

The Moyie is docked on land right next to the shore of Kootenay Lake. Just off her port side there's a piling with an osprey nest on the top. And we got lucky in that the osprey was there, too!

The osprey was the first of our wildlife sightings on the second day of the trip. Heading west on Highway 31A between Kaslo and New Denver, we stopped at a little lake on the side of the road. This was Fish Lake.

In addition to being a pretty little lake in the mountains, Fish Lake is home to a species of amphibian called the Western Toad (Anaxyrus boreas). The toads are likely restricted to a few lakes in this basin and are listed as Near Threatened by the World Conservation Union, and as Special Concern by the Committee on the Status of Endangered Wildlife in Canada. We didn't see any toads, but there were many proto-toads in the lake.

And guess what we saw a few miles up the road from Fish Lake? That's right, a moose! And not just one moose, but a cow and a calf. They were right off the side of the road, and all we had to do to get a good look was find a safe place to turn around and drive by again. I took these shots from the car.

Despite her proximity to the highway, the cow was pretty undisturbed. She kept feeding in the shallow water. It was surprising how long she could keep her head underwater. Meanwhile the calf, obviously not weaned yet as it kept trying to nurse and didn't feed on vegetation, just waited until its mother raised her head again. Then she looked around to check her surroundings and plunged her head right back into the water.

I haven't always had the best of luck in moose country, so I was glad to see these two. They are odd-looking, lumpy animals, even the calves. And to get a good close-up look at two wild moose totally made up for not seeing any at the Kootenai Wildlife Refuge.

So, what do I think of the Selkirk Loop? Highly recommended! The roads are lightly traveled, passage between the U.S. and Canada is easy through these ports of entry, and the scenery is spectacular. You can take the driving trip as we did, or stop and camp along the way. When we were there in early July the weather was quite warm, but those were the first sunny days of the season after a long, wet spring. You'd probably want to have a back-up plan in case your camping trip gets rained out. Honestly, though, the entire drive was gorgeous. If the opportunity comes your way to drive this loop, take it. You won't be sorry.