This week I celebrate the return of the early morning low tides! I was very much looking forward to this tide series, and even though I am in class on Tuesday, Thursday, and Friday mornings I wanted to go out on as many of the tides as possible. On Wednesday morning I went out to Natural Bridges to meet up with one of my students, Maddie, who is studying anemones for her independent research project. The tide wasn't particularly early at 07:08, but there was nobody out there. No surfers, even. The only person I saw out there was Maddie.

There are few things better than an overcast morning in the intertidal. Peaceful, calm, not windy, and uncrowded. I could feel the stress melting away as the only sounds I heard were the coming and going of the surf and the high-pitched 'cheeps' of the oystercatchers.

Natural Bridges is probably the intertidal site that I know the best. It's close to home, so access is easy. It is a state park and a marine protected area, so collecting of any sort is not allowed and the tidepools are about as undisturbed as can be, considering that it is heavily visited. And in the early morning the intertidal is just wonderful. Visiting there and having time to slow down and really pay attention is a real treat for me.

And perhaps the homecoming I felt this morning is due to the fact that just last week I gave a talk to the docents at Natural Bridges State Park. There's something about this particular group that inspires me and rekindles my interest in this special site. 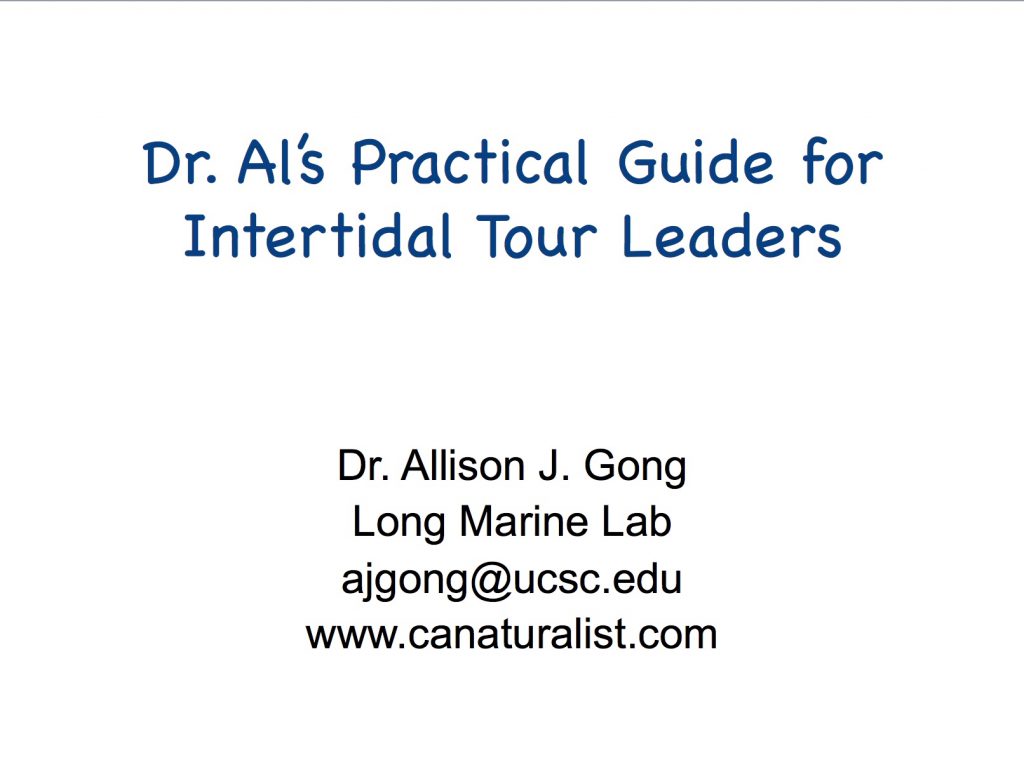 It is now springtime, and the intertidal is in the full flush of reproduction. The algae are starting to regrow and hinting of the lush coverage that we'll see in the next few months.

There are several species in the genus Ulva, referred to as the sea lettuces. They come in a variety of morphs, but all are variations on the same theme: a thin sheet, two cell layers thick. Some Ulva species have blades that are large, while in other species the sheets are rolled into thin tubes or short tufts. Many of them look alike, making field ID problematic, so with few exceptions I simply call them all Ulva sp.

The other common green alga at Natural Bridges is one of the filamentous green, Cladophora columbiana. It has a short thallus, rising from the rock surface like a stout pincushion, which is what it feels like. It grows in little clumps among the mussels in the mid-intertidal.

Today I saw Cladophora with little periwinkle snails, an association that, in my experience, is unusual. The periwinkles are small, less than 10 mm from aperture to apex, and I tend to think of them as a high intertidal species. Cladophora can also occur in the high-mid intertidal but for some reason seeing them together with the periwinkles took me by surprise. There were many of the little snails crawling around in the mid zone, on bare rock or on other animals.

In fact, today was a good day to see lots of animal recruitment. Several areas of rock in the mid-intertidal that were recently devoid of animal life have been colonized by mussels or acorn barnacles.

Most of the individuals in this field of barnacles are Chthamalus dalli/fissus. Those are the small, light brown barnacles. The taller whitish barnacle near the center of the photo is Balanus glandula. But see all the teensy barnacles below and slightly to the left of the Balanus? Those are new recruits, 1-2 mm in diameter. If you click on the photo for a larger view, you can see that while most of the recruits are Chthamalus, there are a few Balanus in there as well. And notice that some of the recruits have landed on other barnacles. This is a smart decision for them. As I've described before, barnacles can't reproduce unless they have close neighbors of the same species. Settling on an established conspecific adult is one way to guarantee that a young barnacle will have potential mates when it grows up.

The largest barnacle in the intertidal around here is the pink barnacle, Tetraclita rubescens. It is fairly common at Natural Bridges, and quite conspicuous because of its size and pink color.

And take a look at this owl limpet! She's carrying a whole world on her back.

Speaking of owl limpets, their tendency to monopolize territories in the intertidal can strongly affect the makeup of the community. It's not just the barnacles that recruit to the intertidal in the spring; mussels do the same, and often quite spectacularly. The disappearance of predatory ochre stars (Pisaster ochraceus) due to sea star wasting syndrome (SSWS) allowed mussels to expand lower into the intertidal, where they would ordinarily be eaten. The ochre stars have been reappearing in the past few years, and hand-sized P. ochraceus are now very common at Natural Bridges. We would now expect predation to cause the lower edge of the mussel bed to retreat back up a bit.

Mussels cannot recruit to Lottia farms because the limpets routinely cruise around their territories and scrape off any newly settled larvae. Lottia farms occur in what would otherwise be prime real estate for mussels, except for the fact that the larvae landing there never get a chance to become established. However, even a big owl limpet doesn't live forever, and when one dies a whole swath of now-vacant area becomes available.

Those two bare patches in the photo above are former Lottia farms. I looked for the owl limpets and didn't find them. And note that band of young mussels running horizontally in the middle of the photo. They are young mussels, relatively clean of encrusting mussels or algae, but aren't new recruits. I'd guess that they've been there a few months. Whatever the age of the mussels, they are taking advantage of the space that used to be occupied and defended by an owl limpet. Or maybe two owl limpets, as that space would be a very large farm for a single limpet.

After two days of class taking me out of the intertidal, I get to spend the next two mornings back out there. I have some collecting to do!