Spending the summer trying to heal a concussion brain injury means that not much science has been happening in my life lately. Now three months post-accident, I'm finally able to do a little bit of thinking and am not quite as exhausted as I was, although extended periods of concentration are still taxing and usually result in what I've come to call the concussion headache. I'm very disappointed to have been on the DL (disabled list) for most of the summer intertidal season, and hope that when the afternoon minus tides return this fall I'll be able to take advantage of them. Fortunately my condition has progressed to the point that I can drive myself out to the wharf to collect a plankton sample and spend a couple of hours looking through microscopes at what I've caught. That's about the limit of what I can do these days; it's not much, but at least it's something.

As we approach the autumn equinox I would expect to see signs that the summer growing season is winding down. Days are noticeably shorter than they were a month ago, and the major upwelling season has passed. In terms of plankton, this should mean a reduction in phytoplankton abundance and diversity, with an overall shift in population makeup away from the strictly photosynthetic diatoms and favoring dinoflagellates, many of which are at least sometimes heterotrophic.

The water at the wharf is remarkably clear right now. Visibility would be fantastic for anyone who wanted to dive under the wharf. September and October tend to be the best months for SCUBA diving in Monterey Bay because the natural cessation of coastal upwelling results in clearer and warmer surface water. I didn't have a Secchi disk or any other way to measure turbidity, but judging by how far below the surface I could see the plankton net as it sank I'd guesstimate that visibility was about 7.5 meters. For people used to diving in the oligotrophic waters of the tropics this level of visibility is downright awful, but for those who dive in productive areas this is not bad.

As expected, when I pulled up the net there wasn't much phytoplankton in the net, and none of the diatom smell I get in spring plankton tows. The net came up pretty clear and rinsed easily into my jar. There was, however, a lot of zooplankton. When I got back to the lab I started looking through small aliquots to see what was there.

The usual suspects were quite plentiful. These included:

Especially beautiful in today's sample were the acantharians:

Acantharians are large single-celled protozoans; I've seen some that are 3 mm in diameter. They build spines of strontium sulfate, which are arranged in precise geometric formations. The protoplasm of the cell extends partway along the spines, which are thought both to deter predation and provide buoyancy. Acantharians are predatory, feeding on smaller unicellular organisms, but also form symbiotic relationships with unicellular algae. The algae are given safe harbor within the cell of the acantharian, and in return provide fixed carbon to the protozoan. Although the players are different, this is pretty much the exact same symbiosis as occurs between reef-building corals and zooxanthellae in the tropics (and also between some of our temperate sea anemones and zooxanthellae).

Here's a puzzle for you. Take a look at this pair of animals: 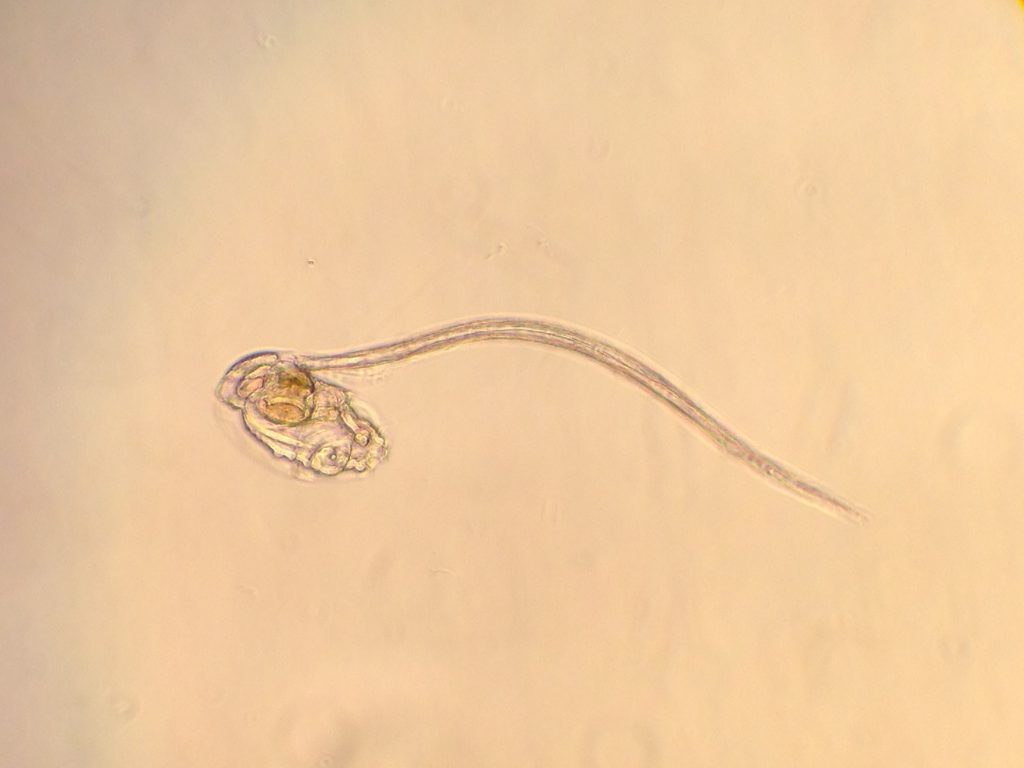 Both consist of a roundish body and a tail. The one on the left is much larger, about 5 mm long, and more opaque. The one on the right is about 2 mm long and is very transparent.

Question: Do you think these animals are the same thing?

Answer: It can often be a mistake to assume any close evolutionary relationship between animals that appear to share a morphological similarity, but in this case shape does result from genetic relatedness. Both of these animals are chordates, my (and your!) closest invertebrate relatives. Yes, we share a closer kinship to these critters than we do to any other invertebrates. We also share with them the following morphological characteristics: pharyngeal gill slits, a dorsal hollow nerve cord, a notochord, and a post-anal tail. Of course, for us the gill slits, notochord, and tail are gone long before we are born, but if you look at pictures of human embryos you can see them. Once we are born the only chordate characteristic remaining to us is the dorsal hollow nerve cord, which runs up through our vertebral column.

The animal on the left is called a tadpole larva, probably of one of the benthic solitary or colonial tunicates. Tadpole larvae are short-lived and lecithotrophic (i.e., non-feeding); the opacity of the body is an indicator of energy reserves stored in body tissues. Tadpole larvae have a short larval life. They typically don't disperse far from the parent, and within a few hours metamorphose into new tunicates.

The animal on the right is a larvacean. It bears a superficial resemblance to the tadpole larva, but is an adult. Larvaceans are entirely planktonic and have one of the most interesting lifestyles imaginable. They live in a house of snot. The house is secreted from an area on the back of the animal, and is inflated as the animal pumps its tail up and down in a rhythmic sinusoidal fashion. The mucus house actually consists of two distinct meshes: the outer mesh is coarse and serves to keep large particles from clogging up the finer feeding mesh. The feeding mesh collects very small particles, which are transported in a mucus thread to the animal's mouth.

Larvaceans are prodigious mucus makers. As any filter does, the house eventually clogs up. Instead of trying to backflush and clean out its house, the larvacean wiggles out of it and secretes a new one. They can build up to three houses a day when the water is full of plankton! The discarded houses of countless larvaceans slowly sink from the surface and are a major source of food to animals in the deep sea.

Larvaceans caught in a plankton net are almost always dislodged from their houses. In a dish or a drop of water on a microscope slide, they thrash about in a characteristic larvacean sort of way. Only once have I caught a larvacean and then been able to watch it build a new house in my dish of water. What I saw today is much more typical.

This poor animal was trapped under a cover slip so it can't move freely, but the tail still thrashes about. You can also see its little heart beating like mad.

The tadpole larva, on the other hand, is a much more sedentary creature. It doesn't disperse far so its tail remains still, and its heart rate is much slower than that of its pelagic cousin:

To shift to a completely different taxon there were, as usual, many crustaceans. In addition to the larval and adult copepods, today I saw several examples of Podon, a type of crustacean called a cladoceran. The most familiar cladocerans are the freshwater Daphnia species, but in Monterey Bay we see Podon on a fairly regular basis. Cladocerans reproduce via parthenogenesis, in which unfertilized eggs develop into daughters, and in the springtime most of the Podon I catch are gravid. At this time of year, however, they are not reproducing, at least not parthenogenetically.

The most striking feature of Podon is its large compound eye, which causes problems. For many creatures living up in the water column, the only way to hide is to be transparent. This invisibility would be interrupted by any pigment in or on the body. Unfortunately for Podon and other animals that try to hide in plain view, eyes are, at bare minimum, a collection of pigmented cells that detect light. For them, eyes are both a useful sensory structure and a big "Here I am!" signal for predators.

The best thing I saw in today's sample, aside from the acantharians, was a small ciliated blob with little ciliated flaps. This cute little creature is the Müller's larva of a polyclad flatworm. It's hard to appreciate the cuteness of Müller's larva in a 2-dimensional still shot, so here's a video:

Okay, so maybe it's not the cutest larva in the plankton. It was swimming really fast and I had to squash it a bit under a cover slip to slow it down enough that I could keep up with it. But I don't come across them very often, so it's always a pleasure when they show up. You'll have to take my word that they're cute.

Oh, and by the way, I kept the tadpole larva and a couple of other shmoo-like larvae in a dish of seawater to see what they will turn into. Tomorrow I may have new things to look at. I dumped the rest of the plankton into a tank of filter-feeders, where they will resume their place in the food chain.