After pretty much neglecting us in February, El Niño has returned with a bang in March. Late yesterday and last night a weather station near me, more or less at sea level, recorded 4.67 inches of rain and wind speeds of 15 mph. Stations in the Santa Cruz mountains recorded close to 6 inches of rain yesterday, and there were patchy power outages throughout the county. This morning I woke to sunny, clear skies. Beautifully clear, with white puffy clouds. The forecast calls for another storm to head in this evening, giving me a window of opportunity to run up the coast and grab some mussels.

I have to say, El Niño's timing could be better. We have alternating weeks of spring and neap tides, and this winter the storms seem to be arriving during the spring tides. More than one tide series has been washed out because of storm surge and majorly big swell. I had figured that this would be the case today, so I didn't expect to get very far down in the intertidal. However the only thing I absolutely had to collect was mussels and I don't need a very low tide for those. It was very unlikely that I'd be unable to collect them, and at the very least I'd be able to take some photos.

Walking across the beach to the rocks, I noticed my first Velella of the season. As usual for these strangely wonderful animals they were gathered into windrows at the high tide level. Many of them were very small, less than 1 cm long, and the largest I saw was about the length of my thumb.

While it is not at all unusual to find Velella washed up on the beach, I did find some in a place that I didn't expect. More on that in a bit.

Conditions in and on the water were pretty rough. There were no surfable waves, therefore no surfers. They'd have been beat up by the waves crashing in all directions.

On a calmer day, the water at this beach can be glassy smooth with very gently breaking waves. Not so today:

Easily accessible beaches such as this one are typically crowded for these afternoon low tides. Most of the people there are just hanging out with their friends, family, and dogs. Every once in a while, however, I run into people who might not be entirely on the up and up. Much of the coast in California is designated as a marine protected area (MPA), and while allowed activities vary from MPA to MPA, in general I don't have permission to collect at any of them with my current state-issued scientific collecting permit. This means that collecting, both scientific and recreational, is concentrated into the few places where it is allowed.

Today I arrived at the parking area at the same time as a family of three adults and about five kids. The men were wearing wellies and carrying 5-gallon buckets. It was clear that they were going to be collecting something. I can't really say that I looked any different, in my hip boots and with my own bucket, so I just smiled a greeting to them and headed out on my way. Given that there was so little exposed rock, we were bound to keep running onto each other. At one such meeting I asked what they were doing, and they said they were collecting mussels to eat. I said I was, too, to use as food for animals at the marine lab. They asked what the limit was. I told them that I didn't know what the limit was for taking with a marine fishing license (assuming that they had one), but the limit for my collecting permit is 35. We nodded and went our separate ways.

Now, I'm not a game warden and it's not my job to enforce the state's rules about collecting, or even to see if other citizens have the appropriate permits or licenses. I generally feel that the better part of valor is to mind my own business. These guys today were friendly enough and completely non-threatening, but my gut instinct tells me that they didn't have a fishing license. Is that any of my business? I don't think so; yet as a citizen of this state I have a vested interest in protecting our wildlife from unlawful take. I know there aren't enough wardens to patrol all beaches all the time, and now that I think about it I don't know that I've ever been stopped by a warden on an afternoon low tide. The enforcement strategy seems to be to let citizens patrol each other, in the sense that skullduggery is less likely on a crowded beach in the broad daylight of afternoon than at the crack of dawn on a morning low tide.

Anyway, on to the matter at hand. I've noticed that recently my eye has been drawn to patterns that occur among whatever objects happen to be around. Scrambling down a little cliff and continuing up the coast I noticed these smears of algae growing on the vertical sandstone face. It's not that I hadn't seen them before, but because of the recent rain there was water running down the cliff face, which added a sheen to the green algae that they don't have when they're dry.

At this site there are some little caves that you can get to at low tide. The tide wasn't low enough to reach the caves that go back any appreciable distance, but I did get to a small one. It was more of deep fissure than a cave, really, large enough to duck into but only a couple of meters deep. The really cool thing about it was the waterfall cascading over the opening. Again, without the runoff from yesterday's rain this little waterfall wouldn't even exist.

Also, there is quite a bit of stuff living inside the cavelet. Not much in the way of algae, of course, with the exception of both encrusting and upright corallines, but in terms of animals there was more or less the same fauna that I'd expect in the high-mid intertidal.

The biggest surprise in this little cave was Velella! A bunch of them had apparently gotten washed up into the fissure by the last high tide. I found them stuck amongst barnacles and algae.

This one was maybe half the length of my thumb. On the opposite side of the cave a crab was taking advantage of this unusual bounty.

I can't imagine there's much nutrition in a Velella for a crab, but the animal is always right even (especially?) when it doesn't make sense to us. The crab knows what it's doing.

All told, it was a short but very satisfying little jaunt to the intertidal. The clouds had spent the afternoon talking about whether or not to build to anything, and by the time I left they'd come to consensus. The wind is picking up now, the rain should start soon, and the National Weather Service says we may be in for thunderstorms tonight. I'm tucked up at home, warm and dry. Have a good evening, everybody! 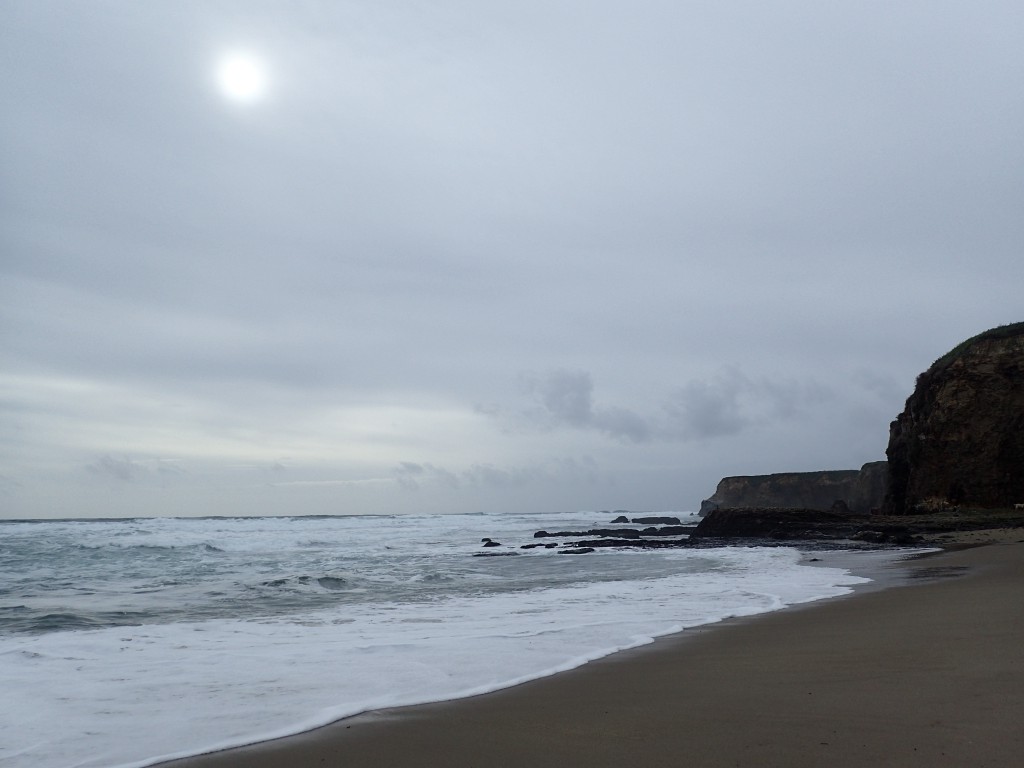