This year I'm teaching Ecology for the second time. It is a field-intensive course: we have all day on Fridays to meet outside the classroom and do something outdoors. Most people understand that hands-on experiences are the best way to learn, whether the subject matter is field-based or computer-based (such as working with software for statistical analyses), and part of my job this semester is to provide as many diverse experiential activities as I can for my students. As I am a marine biologist by training and inclination the course is biased towards marine ecology, but I'm doing my best to include terrestrial activities as well.

Today we visited the Younger Lagoon Reserve on the Long Marine Lab campus, to participate in the ongoing habitat restoration project. We were met by Beth Howard, the reserve manager, and Tim Brown, the reserve steward, who gave us a brief history of the reserve and the conservation work going on there.

We are standing in a plot that had very recently (as in within the last week) been planted with young grasses. The reserve staff, volunteers, and student interns collect seeds from local populations of native plants, germinate and grow them up in the greenhouse, and then plant them the following spring. The idea is that in a few years the larger scrub plants, such as coyote bush and sticky monkey flower, will outcompete the non-native weeds and the plant community will more or less take care of itself. The annual flowering plants should re-seed and repopulate the area at the end of the season.

Tim, as the reserve steward, designed this bit of the reserve. The areas within the polygons are to be planted with flowering annuals, while the spaces between polygons are to be filled with perennial grasses. To make seed gathering easier, we were told to plant in patches, resulting in medium-sized patches of several plants of one species grouped together.

In addition to helping plant upwards of 1500 plants today, we got to see how last year's plants are doing! I'm proud to report that they have filled in beautifully and grown a lot:

Not all the vegetation in the right side of the photo was the stuff that we planted last year. Some of it was weeds. The reserve workers are about to shift from planting mode to weeding mode, to remove as many weeds as possible before they have a chance to flower and set seed.

When it was time to start the actual planting, we were shown how to make holes and insert the baby plants.

The dibbler is a nifty tool that makes holes in the ground. You clear off the layer of mulch, shove the dibbler into the soil, and wiggle it around, making a perfectly round hole. The plants are grown in cone-tainers, that not-so-coincidentally are the exact same size and shape as the holes made by the dibbler. I asked Beth, and she confirmed that the dibbler and cone-tainers are made by the same company. Once the dibbler has made the hole you remove a plant from a cone-tainer, stick it in the hole, tamp down the soil around it, and replace the mulch.

We were instructed to place the holes 18" apart, and not in a strict grid pattern. The goal is to restore a natural setting, not create a formal garden. After the instructions we all got to play in the dirt. 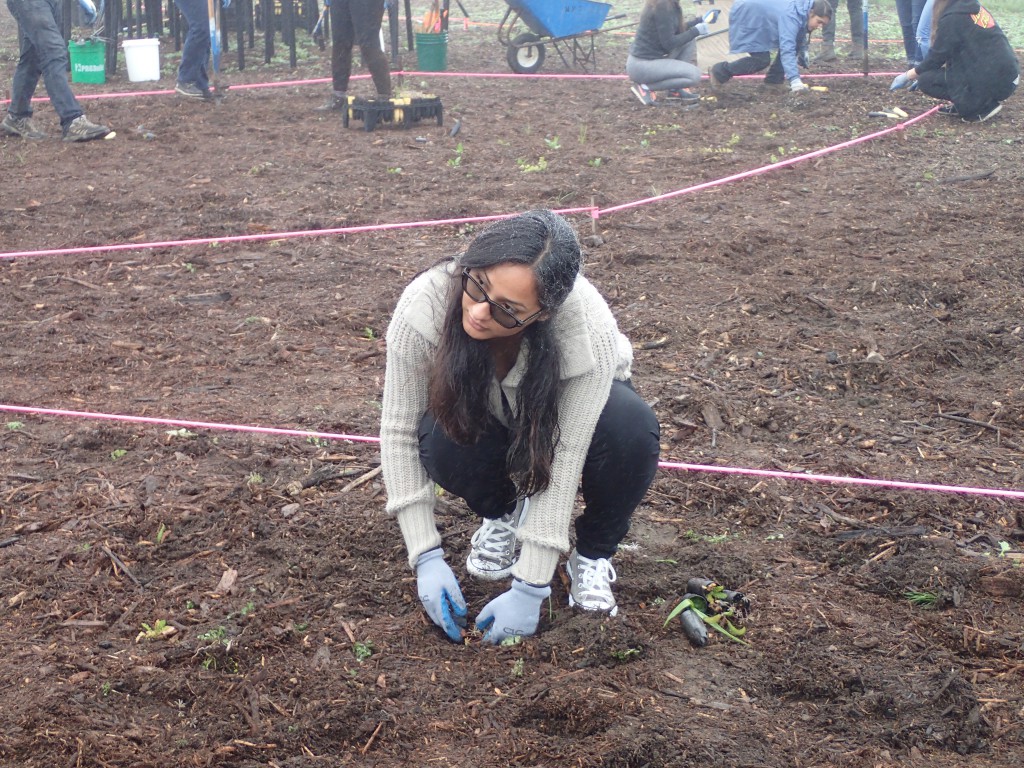 In addition to planting flowering annuals in a couple of the polygons, we also did this:

After our work in the field we went across the marine lab to Younger Lagoon. It rained on us for a while, and we sheltered under the lean-to and looked out over the lagoon. It's beautiful even in the rain.

This red-winged blackbird was loudly staking his claim to a bit of territory. He never showed off his red epaulettes, though. Another bird was replying from the top of a cypress tree a short distance away. The back-and-forth went on for about five minutes, before one of the birds flew off.

For the first time I got to hike the trail that parallels the east side of Younger Lagoon. We didn't go down onto the beach, but I was able to see a perspective of the large rock at the mouth of the lagoon that I'd never looked on before.

Does anybody else see the profile of Abraham Lincoln in this rock?