BEWARE: This is a mini-rant. Continue at your own risk.

Several times over the past year or so I've heard the term "king tide" being tossed about in the general media. I remember looking up the term when I first heard it, back in December 2014, and came across the following definition, which I cribbed from the EPA's website: The king tide is the highest predicted high tide of the year at a coastal location. Okay, I thought then, every year there is going to be one highest high tide and why not call it a "king tide"? A king, after all, is the biggest of the cheeses, the headiest of the honchos, the top of the heap. I could live with that, although I generally steer clear of hokey terms and wouldn't dream of using "king tide" in my classroom.

In 2015, however, it seemed that we heard about "king tides" about half a dozen times. WTF is up with that? Obviously, the highest tide of the year can't occur more than once in a year, right? So why did I read reports of "king tides" in January, around Thanksgiving, and at Christmas last year? Part of the problem is that the meaning of the term itself has morphed into something else. Instead of reserving "king tide" for only the highest tide of the year, writers are now using it to refer to any old spring tide. I detest this trend the same way I detest grade inflation--it gives an ordinary natural occurrence more importance than it deserves and doesn't make it clear what's going on.

First of all, what are spring tides, anyway? Well, spring tides are the extreme low and high tides that we get every two weeks or so. Spring tides and the intervening neap tides, during which both low and high tides are of intermediate height, are due to the gravitational pull of the sun and moon on Earth's water. Obviously the sun, being orders of magnitude more massive than the moon, has much more gravitational pull than the moon; however, the moon is much closer to the earth and thus our tide cycles are closely attuned to the moon's orbit around the earth. 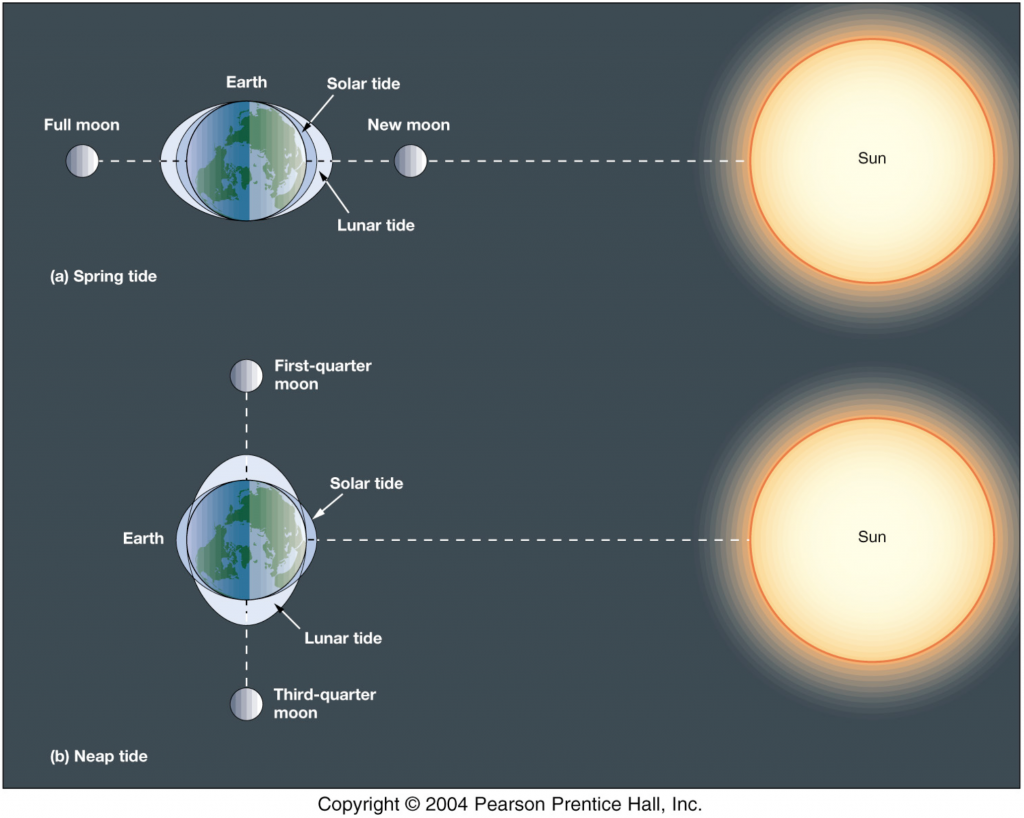 The top of the figure above depicts what is going on during spring tides. During a new or full moon the gravitational pulls of the sun and moon are aligned, causing higher-than-average high tides (and correspondingly lower-than-average low tides). When the moon and sun are forming a right angle with respect to the earth their respective gravitational pulls cancel each other out a bit and result in intermediate high and low tides. These neap tides occur during the first- and third-quarter moon phases. Even people who don't live near the ocean have experienced the different phases of the moon, and that the lunar cycle is about 28 days long. Thus every month we can expect two cycles of alternating spring and neap tides.

Oh, and spring tides get their name from the fact that the tide level bounces up and down like, well, a spring. And the amplitude of the tides increases and decreases throughout the month, as does a spring when you pull it, let it settle, and then give it another pull.

The take-home message is that EVERY MONTH we have extreme high and low tides. You could even say (though I certainly wouldn't) that we have a "king tide" every month, since one of the high tides is going to be the highest of the month. Kinda takes the oomph out of the phrase, doesn't it? What's the fun of being a king if there are 11 other kings? Nobody gets to be THE king, which is kind of the whole point of being a king in the first place, isn't it?

So what are the reporters trying to convey? Digging a little deeper into pages from NOAA and other reputable sites, I think the intended message is that the effects of ordinary spring tides will be augmented by El Niño and climate change. Such effects include increased coastal erosion and flooding. When a spring high tide coincides with a big storm surge, which has happened here in Santa Cruz the past couple of days, the threat of flooding becomes quite real. The National Weather Service issued a high surf advisory for yesterday and today. The surf was indeed big when I went out to check things at the marine lab this morning.

In the context of a spring high tide combined with a big storm-driven surge, I can live with the term "king tide," although I still don't like it and won't use it myself. A tide is a tide and has specific direct causes; same with a storm surge. Mixing them together and slapping the label "king tide" on the conflation gives people an incorrect impression of what's going on and implies that somehow the tide and the surge are the same thing. They are not; they are two independent phenomena that occasionally happen at the same time, that's all. I am an educator and it's my job to impart scientific information in both academic and informal settings. But I feel that my job is made more difficult when the media get all hyped up about an impending king tide and either state or imply that it will be the highest high tide of the year, and then we read about it again a few months later, and yet again during the following spring tide series. It's both bogus and lazy.