It has been almost a month since my big female whelk started laying her eggs, and the embryos seem to be developing nicely. The first time I witnessed this phenomenon I saw the egg capsules begin to turn black, and worried that the eggs inside were dead and decomposing. But the cool thing about Kelletia development is that the larvae themselves become darkly pigmented as they develop, which we see as an overall dingy grayness of the egg capsules: 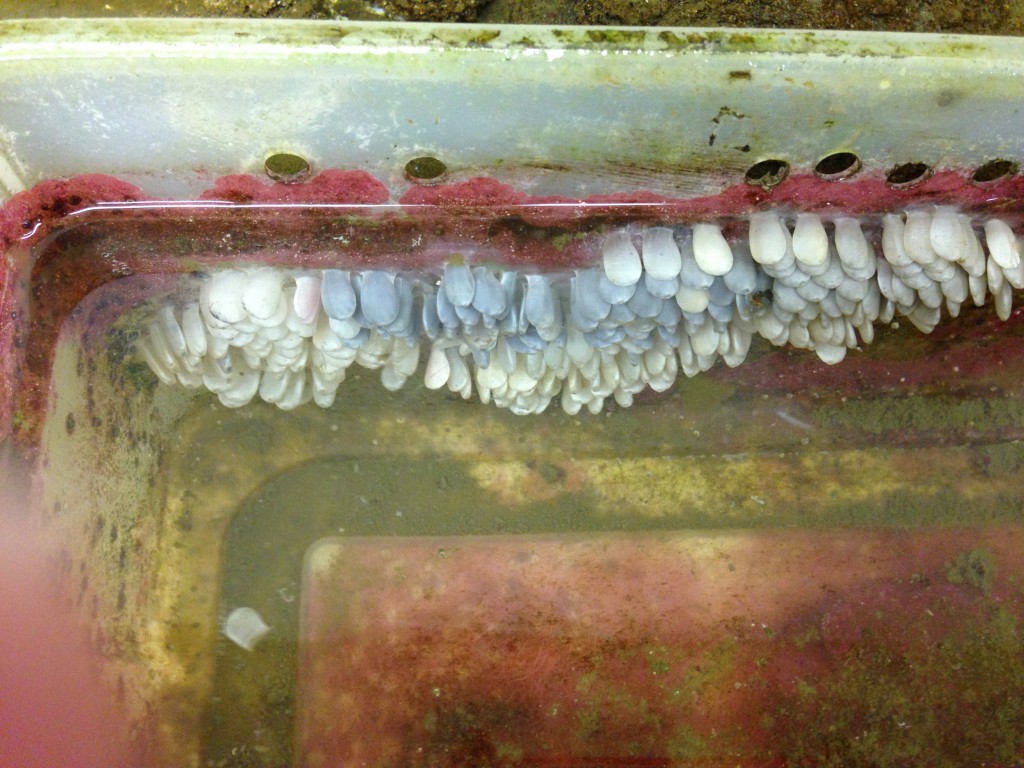 Nosy as ever, I pulled one of the egg capsules off the side of the bin and took it back to my desk for closer examination under my dissecting scope. At the "top" of the capsule (the end that is attached to the bin), the material was quite thin, and I could some vague dark lumps inside. They were slowly moving around, so I knew they were alive.

Viability! This makes me happy and encourages me to "liberate" a few larvae to look at under higher magnification. I squeezed out a few veligers and put them under a coverslip with just enough water to keep their shells from cracking but not enough to let them swim away. Here's a tip for observing small aquatic critters under a microscope:  If you make their universe (i.e., the drop of water you are observing) small, they will be less able to swim away from you. Flattening the drop of water with a judiciously placed coverslip will also help immobilize the creature, as well as taking best advantage of the microscope's optics.

Not too much to look at while stationary, is it? You can see a coiled shell (this is a snail after all) and some blobby structures inside it. At this stage the larva isn't feeding and relies on yolk reserves provided by the mother when she deposited the eggs. Some of the opaque stuff inside the shell is yolk and other bits are various parts of the digestive system. At about 11:00 just underneath the shell there is an elongated transparent area: the larva's heart; you can see it beating in the video below. The light mohawk-looking structure facing to the right is the larva's velum, a lobed ciliated structure that the animal will use to swim after it hatches. The last structure of note is the wedge-shaped thing that points to about 5:00; this is the larva's foot, on the back of which sits the operculum that is used to close up the shell.

After a bit of trial and error I was able to catch some decent video footage through the microscope of a trapped larva:

The larva rhythmically extends and retracts its velum. Because of the coverslip the larva can't go anywhere, but if unencumbered it would be able to use that velum to zip around really fast. It is very difficult to keep up with swimming veligers under a microscope!

My guess is that the larvae will begin hatching on their own in the next couple of weeks. They will be washed out of their tub and down the drain of the seawater table, to take their chances in the big ol' Pacific Ocean.