Sometimes even a naturalist gets to go on vacation, and I was fortunate enough to get to spend a week in Kaua'i.  My favorite spot on the island was the Kilauea Point National Wildlife Refuge on the north shore of the island, where I got to see albatrosses, frigatebirds, and boobies in flight, as well as humpback whales breaching and flipper-slapping offshore.  Amazing!

As much fun as it was to watch all these birds flying around, it was just as entertaining to drive through the adjacent neighborhood and watch albatrosses in people's front yards.  I'd love to have albatrosses in my front yard, but alas, it's not going to happen in California.

Just what are those albatrosses doing in people's front yards, you ask.  Good question.

The Laysan albatross, Phoebastria immutabilis, is a north Pacific species which breeds primarily in the northwestern Hawaiian Islands.  Like all seabirds, their food comes from the ocean.  Albatrosses are known for their super-efficient gliding flight; their long, narrow wings are the inspiration for the design of gliding planes.  The Laysan albatross has a wingspan of 6-7 feet.  On the ground they look somewhat like ordinary gulls, but in flight and close-up they are truly magnificent birds.

Albatrosses are also extremely long-lived birds.  The bird in the photograph below has a band on her right leg.  The information on the band tells biologists when the bird was banded.  This female bird was 60 years old when she was photographed at Midway Atoll in 2011 by John Klavitter of the U.S. Fish and Wildlife Service. 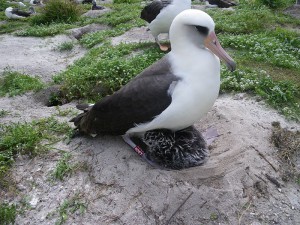 It turns out that albatrosses return to the sites where they hatched as they get old enough to breed.  The Kaua'i albatrosses had been using the north shore of the island as a breeding ground when the housing developments were built, and apparently don't mind either the construction or the people living there.  The human residents take great pride in their avian neighbors, putting up signs telling tourists to keep their distance and leave the birds undisturbed.

We made several passes through the neighborhood to look at the albatrosses, and finally got some good pictures.

Some of the albatrosses on lawns are incubating eggs, and some are juveniles hanging out and scoping out future mating possibilities.  If all goes well, albatrosses will be nesting in and fledging from this neighborhood for many decades to come.